Do Not Talk about Climate Change Poster in DC

Franke James says, “The street posters appearing in Canadian cities (Ottawa, Halifax and Calgary) and in the USA in Washington, D.C. are part of my campaign to get the Canadian government talking about climate change. A topic they really do not want people to talk about. They are so busy selling tarsands oil and silencing anyone who mentions the fact that bitumen is highly polluting and contributing to climate change, that it’s a challenge, a big one. The bottom line in the government’s secret meddling and censorship of my art was revealed in this internal government email (obtained under access-to-information laws):
“The artist’s work dealt mostly with climate change, and was advocating a message that was contrary to the government’s policies on the subject.” Jean-Bruno Villeneuve, Spokesperson, Foreign Affairs and International Trade Canada
“I took the spokesperson’s words and featured them on my “Do Not Talk” poster. The image is of the Canadian Parliament buildings (in Ottawa, Ontario) dropped into the Mordor-like Alberta tar sands.” 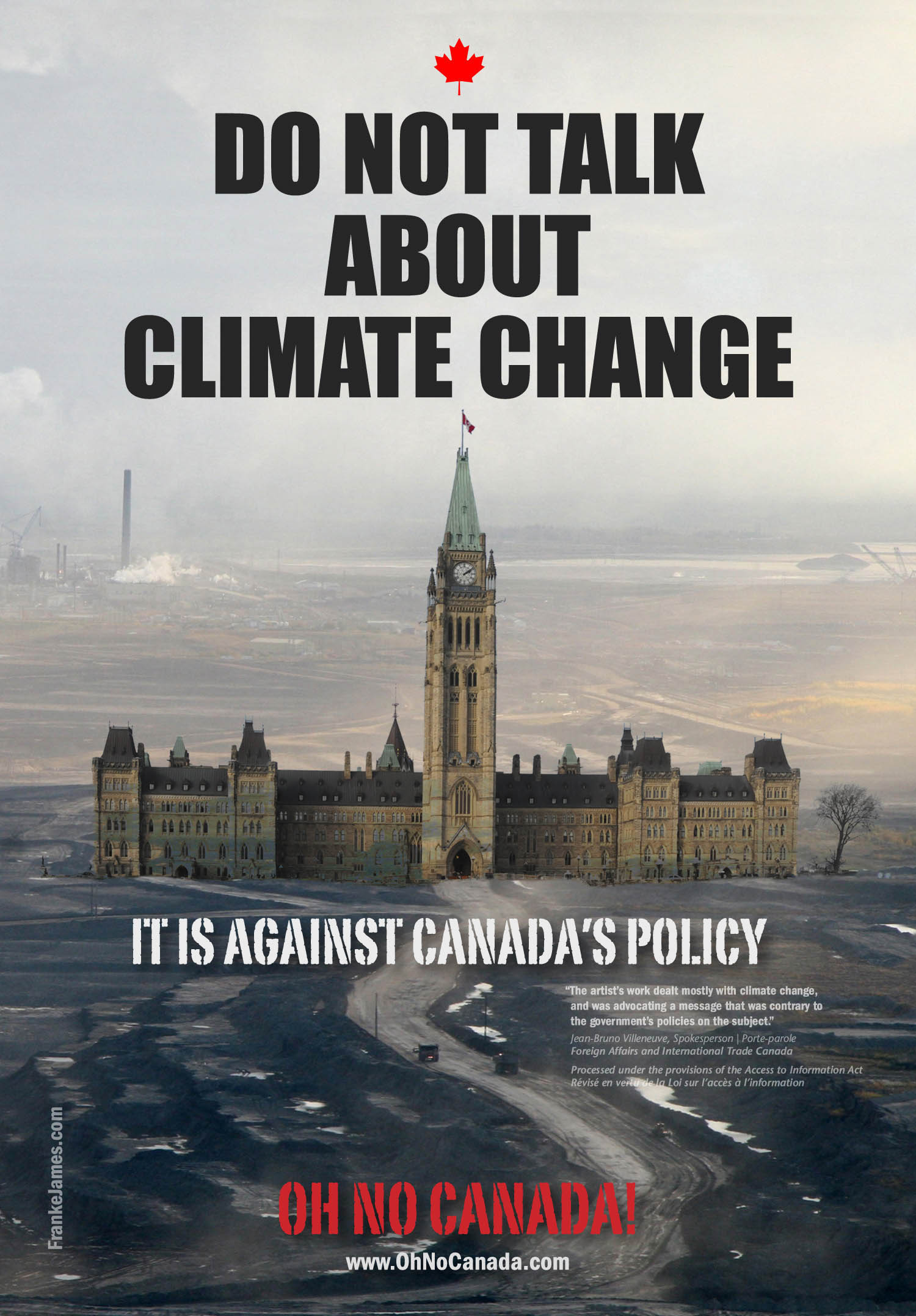 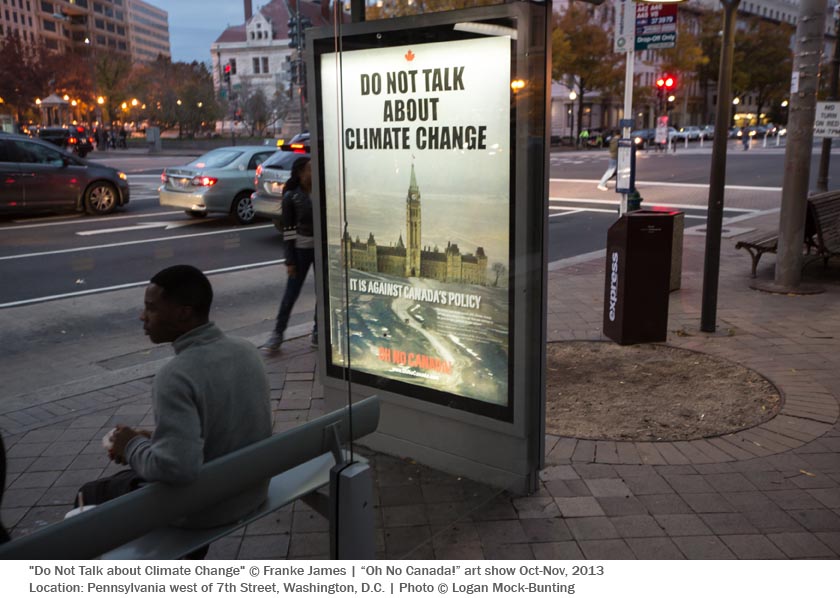 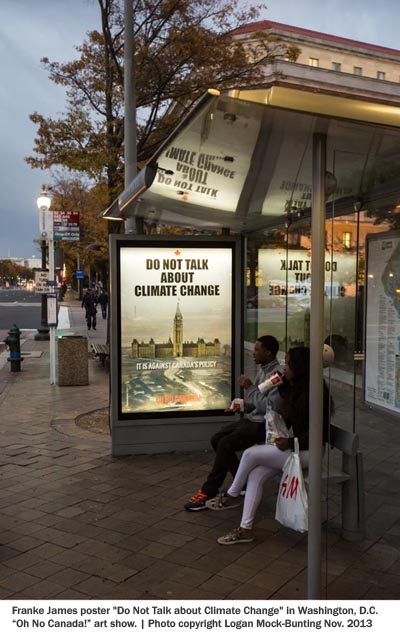 David Suzuki: “There is a systematic attack on science and democracy taking place in Canada, and the Harper government isn’t even trying to hide it. But scientists cannot and will not be silenced, not when we are facing an irreversible climate catastrophe like the tar sands.”

Thanks go to Indiegogo supporters, the NRDC, Sierra Club, and NWF for making the Washington “Oh No Canada!” show a reality!

Do Not Talk about Climate Change Posters are Getting Around!

See the Do Not Talk posters in Ottawa, Ontario and Halifax, Nova Scotia. And now in Calgary, Alberta (until December 8).

The Guardian UK:
Artist finds inspiration in Canadian government’s attempt to silence her by Suzanne Goldenberg, US environment correspondent, “Visual essays by Franke James reveal how the ‘troublesome artist’ was targeted because her views on climate change clashed with the push to develop Alberta’s tar sands.”

“Canada, under the government of Stephen Harper, has exhibited little patience for dissent. The government has muzzled government scientists, insulted Nasa climate experts, and dismissed environmental protesters as dangerous radicals.

“But there is apparently one woman whom the government can’t shut up: the Toronto environmental writer, illustrator and activist Franke James, who turned the efforts to silence her into material for a new book. Banned on the Hill: A True Story about Dirty Oil and Government Censorship, released this week, shows how Canadian bureaucrats tried to silence James because her views on climate change clashed with the Harper government’s push to develop Alberta’s tar sands. The story is told through visual essays as well as official emails obtained by James, in which government bureaucrats discuss the troublesome artist and her work.” Link

Do Not Talk about Climate Change in Ottawa, Ontario, Canada 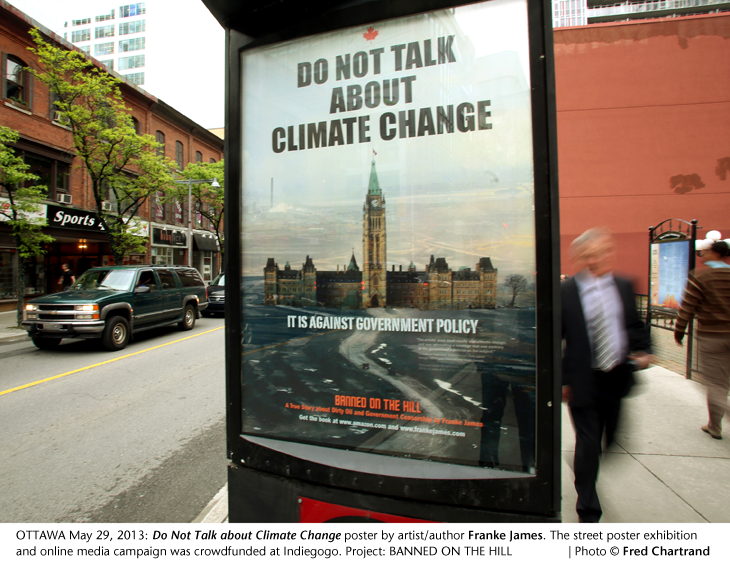 Do Not Talk about Climate Change in Halifax, Nova Scotia, Canada 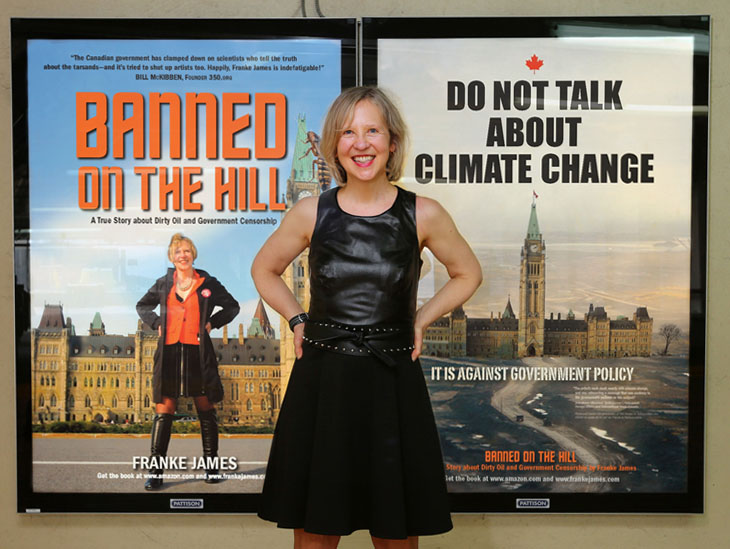 Do Not Talk about Climate Change in Calgary, Alberta, Canada 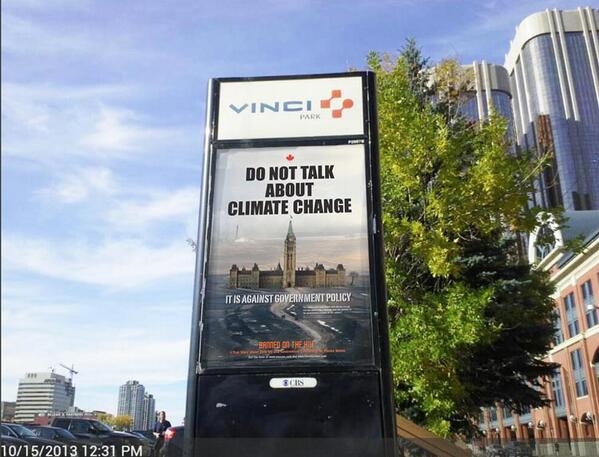